Her modern and industrial design of a dining space with bold wallcovering was judged best in category and the overall best of 300 entries in 10 categories by interior design journalists from throughout the U.S. and Canada.  She also had the first-place home office, second-place family room, and won in three other separate categories of judging competitions. 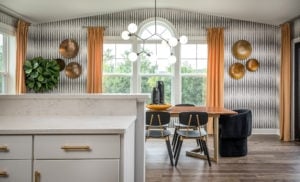 “I am thrilled to win this honor,” said Holland, ‘especially since this was the first time I entered Dream Room. I started my business only four years ago. Being Designer of the Year and winning so many other awards is very exciting.” First Runner-Up was the franchise of sisters Barbara Elliott and Jennifer Ward Woods and their design team, of Stone Mountain, Ga. Their family room took second place among the winners in each room category. They also won firsts in bedroom, kitchen and outdoor, along with seconds in living room and outdoor, and a third in bathroom.

Second Runner-Up was Lynne Lawson, of Columbia, Md. and her design associate Laura Outland, whose bathroom took third place among the first-place rooms. They also won third place in bedroom and first in another judging.

First-place winner of the Donayre Award, which is voted on by company franchisees and is named for Carol Donayre Bugg, ASID, retired company vice president and director of design, was Lisa Bibawi, of Dallas, for her first-place living room.

Elliott and Ward Woods had the third highest online voting total for their kitchen, which took first place in the journalist judging.

Holland’s dining room also won the Patti Award. Named after Patti Coons, former public relations director who was instrumental in starting the International Dream Room competition, the award is for first-time entries into the competition and is judged by those franchisees who have achieved Decorating Den Certified Decorator status.

This was the company’s 38th International Dream Room awards presentation. It was held at the company’s DESIGNCON 2022 annual conference in Myrtle Beach, S.C., where the conference was to have been held in 2020 but was prevented because of Covid.