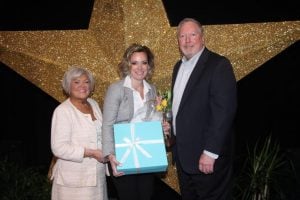 Designer of the Year Kimberly Paulus (center) with President and CEO Jim Bugg, Jr and Patti Coons, who was honored with a Making a Difference Award for having originated the Dream Room competition 35 years ago.

Her makeover of a bedroom was judged the best of 385 entries in 12 categories by a panel of interior design journalists from across the U.S. and Canada.  “My design resulted in a transitional master retreat that offers a serene, relaxing atmosphere in blue and grey,” she said. “Detail trim frames wall sconces and artwork while breaking up the expansive space. Luxurious bedding and designer fabrics add depth while furniture selections add interest. Sheer window treatments frame the seating area and soft lighting adds to a quiet mood.” She also was tied for third in the living room category and took two honors among first-time participants in the competition.

First Runner-Up was Lynne Lawson and her decorator Laura Outland, of Columbia, Md., who won first in living room and third in commercial.  Second Runner-Up was the sister duo of
Barbara Elliott and Jennifer Ward-Woods of Stone Mountain, Ga. who won firsts in bathroom, children’s rooms, and family rooms along with seconds in bedrooms and kitchens.

This was the company’s 35th Dream Room Awards competition. Other awards announced at the Paris Las Vegas conference were:

Winners of the Donayre Award, which is voted on by company franchisees and is named for Carol Donayre Bugg, ASID, retired company vice president and director of design, were Lynne Lawson and her decorator Laura Outland, of Columbia, Md. for their living room makeover.

Second place was Terri Ervin of Dacula, Ga. for the main lobby in an over-55 community clubhouse.

Barbara McGinnis Hayman, of Spring City, Pa., won both first and second first in the People’s Choice Award segment, an online judging open to the public in which more than 30,000 votes were cast among the various entries. Her makeover of a bedroom received the highest number of votes cast and her design of a dining room attracted the second-highest number of votes.

Kimberly Paulus of Missouri City, Texas  won first place for her bedroom design and second for a commercial space.

Kisha Lake, a decorator with Elliott and Ward-Woods, won third place for a bedroom.